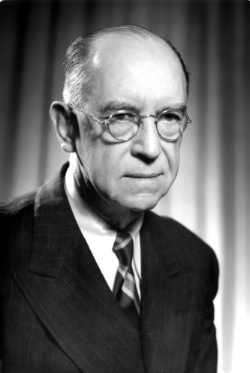 Dr. Howard Riley Raper was the son of a newspaper editor in his native city of Chillicothe, Ohio. He was a 1906 graduate of the Indiana Dental College, which is now the Indiana University School of Dentistry. He then served on the faculty of the College until 1917, when he moved with his wife, Thelma, to the Southwest (at the age of 30) for health reasons. The move must have done him good, as he lived to be 91!

In 1913, Dr. Raper published “Elementary and Dental Radiography,” the first textbook in oral radiology. In 1925, in cooperation with the Eastman Kodak Company, he developed the bitewing examination. He was an eloquent and prolific writer. “Man against Pain,” his history of anesthesia was published in 1945. He contributed “As I See It” columns in “Dental Survey” from 1950 to 1963.

Honors bestowed on Dr. Raper included the Distinguished Alumnus Award from Indiana University, the Callahan Medal from The Ohio State University, the Dentist of the Half Century Award (presented by the New Mexico State Dental Society in 1950), the doctor of laws degree from the University of New Mexico, and the Award of Merit from the Horace Wells Society, named for the “father” of modern anesthesiology. Not a member of the American Academy of Oral and Maxillofacial Radiology, he was made an Honorary Fellow on March 17, 1958. He died on January 15, 1978 in Albuquerque, New Mexico.

Indiana University established the Howard R. Raper Oral and Maxillofacial Radiology Award in cooperation with the Academy. The Award recognizes a graduate student with potential for an academic career in oral and maxillofacial radiology.

The Howard R. Raper Award, sponsored by the American Academy of Oral and Maxillofacial Radiology and the Indiana University School of Dentistry, has been established to recognize a promising graduate student who demonstrates an interest in oral and maxillofacial radiology and intends to pursue a career in academia. The monetary award is intended to help the student’s academic pursuits.

The award will include a certificate and a check for $599 ($300 is contributed by the Howard Riley Raper Fund from Indiana University School of Dentistry).

The award is given to a graduate student who is in the second or third year of an oral and maxillofacial radiology graduate or postgraduate educational program at the time of application. The candidate’s nomination for the award must be made by the program director. Applicants are not eligible for the Radiology Centennial Scholarship Award.

The criteria for judging the nominees will be based on academic achievement in the graduate or postgraduate program and on potential and interest in oral and maxillofacial radiology. The selection committee shall consist of the chairman, who shall be a member of the faculty at the Indiana University School of Dentistry, and six additional AAOMR active members, one of whom shall be the Academy’s President.

The applicant should fill out the online application, including the applicant’s career plans and a current Curriculum Vitae.

Complete this form to begin the process