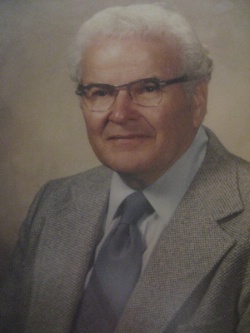 Professor Albert G. Richards was born in on January 7, 1917 in Chicago, where from childhood he was a tinkerer, building marionettes with cast lead limbs and movable joints. He built crystal set radios. He learned about photography in his father’s wholesale photo-finishing business.

He received a BS in chemical engineering at the University of Michigan in Ann Arbor in 1940 and joined the faculty of the School of Dentistry at Michigan as an Instructor in dental radiography, which was meant to be a temporary position until he could pursue a PhD in physics. That was not to be. He spent his entire career teaching dental radiography. He was named the Marcus L. Ward professor of Dentistry, the first recipient of a distinguished professorship at the University of Michigan School of Dentistry.

Over the years he published about 100 articles in various journals, on topics as varied as the first electron microscopic pictures of the microstructure of human teeth, radiation safety, new intra-oral radiographic techniques, rare earth radiation filters, and dynamic tomography. In the mid-1960s he developed the recessed cone dental x-ray machine. He holds five other patents for radiographic devices.

He is perhaps most famous for his floral radiographs, several of which hang in museums across the country. He has published a book of 100 such radiographs. One of his radiographs was featured on the cover of Smithsonian magazine, while another graced an article in the same issue.

Professor Richards was the first non-dentist president of the American Academy of Oral and Maxillofacial Radiology.

The Albert G. Richards Graduate Student Research Grant is designed to assist postgraduate students in conducting applied research in Oral and Maxillofacial Radiology. It provides funds for supplies, equipment and other costs such as computer time or shop work. The objective is to encourage research in dental radiology by assisting promising graduate students to further their research goals.

The awardee will be announced and recognized at the Annual Session of the AAOMR.  Awardee receives $5,000, sponsored by Pacific Dental, and a certificate.

Applications will be reviewed by members of the Awards Committee and the award will be given based on the following criteria:

Complete this form to begin the process